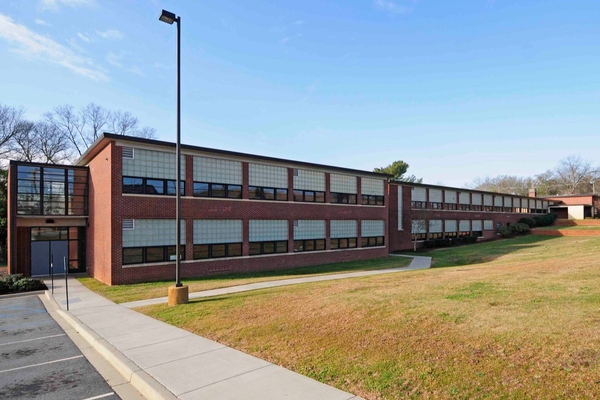 SPARTANBURG — The redevelopment of the former Mary H. Wright Elementary School on Caulder Avenue in Spartanburg's Southside into residential apartments will reserve 20 percent of the units for affordable housing.

The $11 million project will include 53 apartment units, of which 11 will be designated for workforce housing units and rented to households at 80 percent or less of area median income, with rent and utilities not amounting to more than 30 percent of their income. City Communications and Marketing Manager Chris Story said a household of four people earning $50,000 or less annually would qualify for the affordable housing units.

John Montgomery, Montgomery Development Group CEO, said the first apartment units will be completed by April with construction continuing at the site. The project will include one- and two-bedroom units. The former school site at 261 Caulder Ave. will include a fitn ess center, pool, dog park and outdoor grilling area for residents.

"The site had been sitting vacant for many years before I purchased it," Montgomery said. "The Southside has not seen investment for quite a while and I hope this will help spur more growth on the Southside."

Construction at the site began in March 2021. Montgomery said once the school is redeveloped he plans to develop land behind the school for more residential housing, likely in 2024. He anticipates building 50 to 60 additional apartment units in a new building to be constructed behind the former school.

City Council approved a development agreement with Montgomery Development Group for the project in November 2020. As part of the agreement, Montgomery will help the city improve pedestrian access from Caulder Avenue to the Mary H. Wright Greenway.

The former school was named after Mary Honor Farrow Wright, who founded the city's second school for Black students on the Southside. She taught until 1936. The school was opened in 1951, bearing her name.

Montgomery said he placed the school on the National Register of Historic Places and is working with the State Historic Preservation Office and National Park Service to renovate the building while maintaining the building's historic structural integrity.

"I love to repurpose old buildings instead of building new ones all the time," Montgomery said. "I saw it there deteriorating and wanted to do something in that part of town that has not seen activity in a long time. I thought the project would bring attention to the Southside.

"I talked to the city about other land they own and I think there are other opportunities to develop the Southside and want to prove this project can be a success and lend support to do more."

"I think it's going to be a catalyst for the Southside," Rice said. "The project will be transformative. It gives us another option for housing. I appreciate developers who see uniqueness in different sides of town. The Southside has a history in the Black community with having pride in the neighborhood with home ownership."

When the school was closed, the Mary H. Wright name passed to the elementary school located at 457 S. Church St. The former school at Caulder Avenue has been used by the Spartanburg Housing Authority for office space. Prior to redevelopment, the building was vacant for five years.