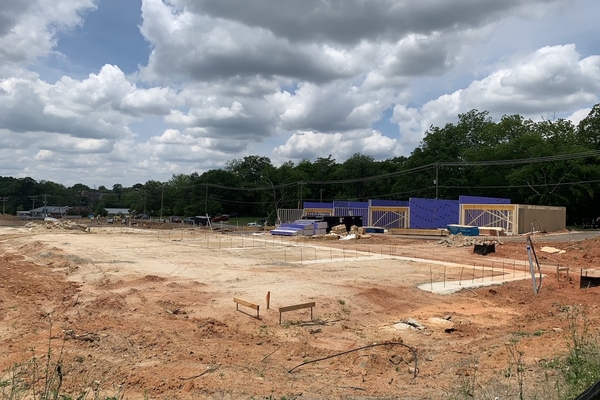 After decades of slow and halting growth, we are living through a robust period of economic expansion in Spartanburg County. You can see it in the dizzying array of construction projects all across the community. From Boiling Springs to the city of Spartanburg to Duncan, and from major residential projects to Downtown Spartanburg’s ongoing renaissance to the continued strength of our industrial sectors, exciting new projects and developments are everywhere you look.

The wave of growth includes new development in communities that have been largely — or even completely, in some cases — bypassed for decades. In the City of Spartanburg, for example, the Northside (our Northside Townhomes project is pictured above) and Southside communities are seeing significant new investment, while the Highland neighborhood is primed for the same following the completion of its master plan earlier this year.

Such progress doesn’t come without concerns. Concerns about gentrification in particular have been voiced by some longtime residents as new projects have been announced in recent months.

What is inclusionary development?

In short, inclusionary development ensures that people of all income levels are able to afford the units in a new development or neighborhood. They include a mix of market-rate, affordable/workforce, and/or subsidized units. By including such a mix, inclusionary development ensures that longtime residents have new options to remain in their neighborhood even as some units with price points that may be higher than average become available. The goal is to ensure communities retain their character and keep people from being “priced out” of their neighborhood while bringing new and needed housing stock online.

It can be a difficult balance. Often, communities find themselves trying to reverse engineer that balance after years of fast growth sends property values and resulting taxes skyrocketing. At that point, many people who have lived their entire lives in a neighborhood sell their homes or can no longer afford the soaring rents and move. The end result is a community that becomes more homogenous and less culturally and socio-economically diverse.

It’s no wonder that people are especially concerned about that prospect in the Northside and Southside neighborhoods, given their excellent locations: adjacent to Downtown Spartanburg, within a great school system, near Spartanburg Community College and Spartanburg Regional Medical Center, and along the city’s bus lines. Ensuring that people of all income levels have access to those amenities is a priority for the city and is a goal that we will continue to embrace at Montgomery Development Group.

Responding to that priority in the Northside master plan, Montgomery Development Group will add 47 3-bedroom, 3.5-bathroom townhomes in the first of three phases. Upon completion, the project will include approximately 130 units, a quarter of which will qualify as affordable housing to help ensure the Northside community remains an affordable place to live for all families even as it increasingly attracts new residents. Construction on the first phase began in October 2020 and is expected to be completed by the end of 2021.

Montgomery Development Group’s newest project is The Avenue, the conversion of the historic Mary H. Wright Elementary School into 53 apartments, which will consist of 1-, 2- and 3-bedroom apartments. Twenty percent of the units will qualify as affordable/workforce housing and be available only to people making up to 60 percent of area median income.

Montgomery Development Group listed the former school building — the first African-American school in the city of Spartanburg — on the National Register in 2020 while working with federal and state regulators and dozens of local stakeholders and residents on a long-term plan for the property, which had fallen into disrepair after sitting vacant for a decade.

Once renovated, the former school will again be a center of life on Spartanburg's historic Southside. The property will honor with a historic marker Mary Wright, a celebrated local educator and namesake of the school. It will also boast beautiful amenities, including a swimming pool, fitness center, dog park, and a new trail connection to the city's Mary Wright Greenway. Other amenities are being considered as the project moves through the community engagement and regulatory approval process. Construction began in March 2021 and is expected to be completed in the first quarter of 2022.

What's going on in the CRE industrial market right now?